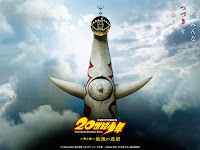 When a manga series is condensed into a movie trilogy, a lot of the writer's intended purposes and thoughts are understandably sacrificed. '20th Century Boys' is a conscientiously woven tale about a modern day messiah who helped realize an end of days prophecy meant only as an innocent lark by a boy (Kenji). A band of renegades comprised of Kenji and his childhood friends decide to expose the enigmatic, masked messiah for who he is and a battle of epic proportions promptly ensued. The screen version of this cult comic had managed to retain its core essence, making do with picking out only the crucial elements of the mystery thriller. Which is fine by us, don't get us wrong. How else were they supposed to shoot it? What we didn't like though were the corny moments which seem to pop up time and again. When these moments appeared in the manga, it didn't seem out of place because the medium allows for silliness. On screen, these scenes are quite jarring especially when the characters go into serious mode or are faced with grim matters. The first part was the one we liked most as it wasn't as cheesy as the other two. Still, when looked at as a whole, it is an alternative kind of mind-bender which is inventive to say the least when compared to what's out there ('Lost' excluded, of course). Read the manga. It's a more complete experience.
3 STARS!

elgringo said…
I'm pretty unfamiliar with manga and anime but I did love Ranma 1/2 back in the day. Picked up a copy randomly at the library and got sucked in completely. Just starting to watch more Miyazaki (I know, I know, beginners' stuff) and I have sketchy memories about something called Bubblegum Crisis. Was that a show? I remember liking that for a while. Good three-part info-article on 20th Century Boys. The screenshot you chose looks like the new Olympics mascot, haha.

Thanks for participating in the My Best Post Blog-a-Thon. Your link (and some nice words from me) will be posted on Friday. Please take some time to comment on some other people's posts who's participated.

1minutefilmreview said…
Sure Gringo, thanks for featuring us!

Director - Ritwik Ghatak Genre - Drama/Musical Directed by Ritwik Ghatak, who was previously unknown to us, this picture is extraordinarily without blemish. From the occasionally unusual but captivating soundtrack, its cinematography which can only be described as pure class and the arrestingly magnetic performances of its cast, this film is a gift to fans of cinema everywhere. The story isn't multitiered with plots aplenty, but the simple script hides a message-driven lesson which is heavier than how it appears. Nita is a woman who fends for her family even though she risks losing herself in the process. Embodying India's long suffering daughters who often don't get any say in society, Nita was Ghatak's tool in bringing out to the open one of India's social ills.Highly memorable and we recommend immediate search and view. 5 STARS!    All about The Cloud-Capped Star

Director - Lawrence Lau Genre - Drama Hong Kong movies don't often surprise us. There are numerous times when we are burnt by scripts with no soul starring the most talented actors. 'Besieged City' is directed by Lawrence Lau who also did 'My Name Is Fame' which we rather liked as well starring Lau Ching Wan. This movie here had no stars yet it made a huge impact on us. The story is basically about a kid who got into trouble and drags his older brother into the mess. Suspected of killing the girlfriend of a triad leader he himself is injured badly, ending up in the hospital. His older brother is being sought by the triad in order to retrieve some drugs they claimed was taken from them by his sibling. Intrigue ensues when we try to figure out what actually happened along with the protagonists of the movie. The cast is mostly young unknown actors which is quite refreshing since we grew up with the mugs of every popular Hong Kong actor who